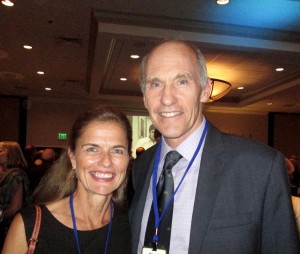 Captain Carl H. June ’75, USN (Ret.), the Richard W. Vague Professor of Immunotherapy at the University of Pennsylvania’s Perelman School of Medicine. After graduating from the Academy, Dr. June earned his M.D. at Baylor College of Medicine.  Embarking on a career in medical research, Dr. June held appointments with the Naval Medical Research Institute/Office of Naval Research, Bethesda Naval Hospital and the Uniformed Services University before establishing his lab at the University of Pennsylvania. He has made significant contributions to improving treatments for cancer and is best known for his revolutionary approach to gene therapy for leukemia, one The New York Times called “a turning point in the long struggle to develop effective gene therapies against cancer.”

Each year, we honor distinguished graduates because of their demonstrated and unselfish commitment to a lifetime of service, their personal character and the significant contributions they have made to the Navy and Marine Corps or as leaders in industry or government. The 2016 Distinguished Graduate Award Ceremony will be held on Friday, 1 April. We will provide additional background on our newest Distinguished Graduates inShipmate, WaveTops and our website in the near future.

In addition to Carl, the other individuals chosen for 2016 are: The Honorable John H. Dalton ’64-70th Secretary of the Navy and Vice Admiral Robert F. Dunn ’51 Former DCNO Air.

As details become available for the award ceremony on 1 April 2016, we will pass them along.  I hope that we can fill Alumni Hall with a strong showing from the Class of ’75 for our classmate: Dr. Carl June.